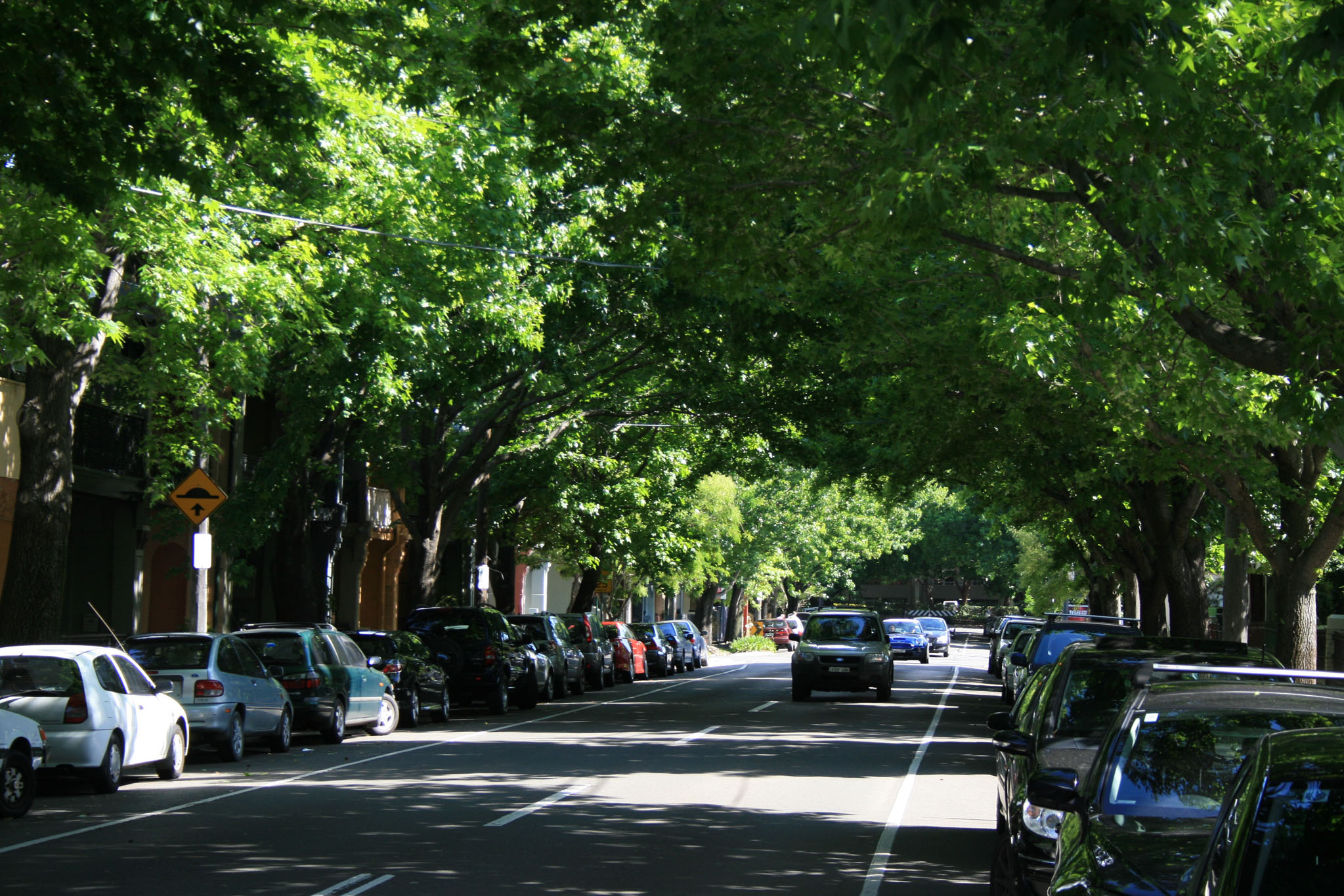 Street trees are all around us, if we are suburban and fortunate enough, so let’s pay them some attention. They are important.

Michael Andrews, a member RNP Cabins Community Landcare Group and an executive member of Landcare Illawarra, kicks off the conversation.

The Cool Suburban Spine – Trees for our futures

In 2018, finally, the concept of human impact on global climate change has become a mainstream notion.  Climatic patterns are changing; south-east Australia is becoming hotter; extreme weather events are more frequent; sea levels are on the rise; the ranges of native flora and fauna are changing.

But how are we responding to these growing pressures?

In suburban Corrimal a small group of residents has had a recent win.

The area adjacent to Corrimal railway station was re-zoned to R3 – Medium density residential in the 2010 Local Environmental Plan.  The group was, and continue to be, supportive of the change.  Corrimal is a busy business/commercial hub.  It includes several schools and pre-schools and is well connected to Wollongong and Sydney by rail and bus services and the coastal cycle-way.  The increase in residential density may also slow the rate of green-field urban development in crucial natural areas of woodland (Yallah, Dapto, Calderwood) and rainforest along our escarpment (Helensburgh, Jamberoo, Kiama).

The result of the re-zoning has been very apparent in Corrimal.  More unit blocks are appearing; real estate “For Sale” signs dot the streets and property values have increased.

The flip-side – an unintended consequence – is also very apparent.  Every property sale has led to the potential for tree removal.

The vast majority of trees cleared are those on private land and their removal is subject to either Development Consent or Tree Preservation Order approval.  But still the trees fall. This is the sad reality.

Our group of residents was concerned by this and approached Councillors through informal and formal channels. A two-year campaign resulted in Wollongong City Council’s installation of about 40 street trees along three streets in the R3 zone.  These trees have been subject to difficult weather conditions since their planting in November 2016, but they are doing OK.

The Cool Suburban Spine refers to avenues of street trees strategically planted along walking/cycling routes through suburban areas.  The trees, once established will shade families as they go about their business, cool homes, reduce solar deterioration of road surfaces, capture ground water, reduce urban run-off and potentially attract birds and other wildlife.

They also create urban-forested corridors linking the escarpment to the sea, and littoral vegetation to woodland to rainforest. In short, they pay for themselves many times over.

Forty trees are a drop in the ocean.  But landcarers are perfectly placed to increase the number.  We understand trees and their value, we know how to work together and we lobby.  We get stuff done. I believe that we need to get more of this kind of stuff happening – before it’s too late.  How long does it take for canopy to close under an avenue of street trees?  Way too long!

Street trees more than pay for themselves

A study by the US Nature Conservancy found that investment in tree planting of just US$4 per resident in some of the world’s largest cities could improve the health of tens of millions of people by reducing air pollution and cooling city streets.

Trees and landscaping in the street are critical in creating an environment that people want to walk in, especially for recreation. The benefits for walkers are both aesthetic and practical, with street trees providing shelter from the sun and, to some extent, rain.

The Heart Foundation summarises the benefits of urban trees. Key points include:

There is substantial evidence to indicate that people benefit physically, psychologically, cognitively and socially from interaction with nature.

Importantly, it is not necessary to fully immerse yourself in nature to benefit. There is evidence that people derive psychological benefit simply from being able to see trees and plants in a urban context, even when viewed from inside buildings.

So in summary, street trees: